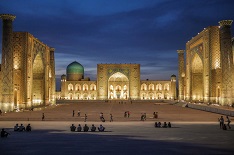 Uzbekistan culture is a combination of different ethnic groups and cultures. Approximately 71% population of Uzbekistan is Uzbek whereas Russians, Tajiks, Kazaks, Tatars, and Karakalpak are also in Uzbekistan but in minority groups. The culture of Uzbekistan is very unique and colorful. In the Uzbekistan tour, must attend Uzbekistan festivals and experience the Uzbek music, dance, and art. Arts and crafts, the main attraction of Uzbek culture and also the center of enticement for tourists.

Places to Visit in Tashkent

Places to Visit in Uzbekistan

Explore the famous tourist attractions in Uzbekistan and it is one of the best places in the world with amazing sightseeing attractions.

Samarkand, famous for its mosques and mausoleums. The second-largest city of Uzbekistan and its some sights are included in the UNESCO World Cultural Heritage List. Samarkand the most famous tourist attraction in Uzbekistan. The best place where you experience the Uzbek culture and try their delicious cuisine like dolma, and stews. In summers, the climate of Samarkand is hot and cold in winter. April, May, and June are the best months to visit Samarkand.

Bukhara, the major ancient center for Islamic ideology and culture of Uzbekistan. Numerous mosques, shrines, and madrasahs of the centuries-old are still preserved there. More than 350 mosques, 140 architectural monuments, and 100 religious colleges are present in Bukhara. Bukhara city was the large commercial center on the Great Silk Road.

Places to visit in Bukhara

Khiva, famous for its historic walled city. Shinny turquoise minarets in Khiva attract travelers. Khiva is bounded by the Karakum Desert to the south. Khiva the beautiful and marvelous city in Uzbekistan. It is the home of ancient sites in Uzbekistan. Book Uzbekistan tour and explore the beautiful city Khiva.

Urgench is in western Uzbekistan. Travelers use Urgench as a transport hub for Khiva. In Urgench, many remarkable sites fascinate the tourists. A small city and you can easily explore this astounding city through taxi, shuttle buses, and minibusses. Traditional wears, embroidered accessories, jewelry, precious stones, and metalwork are the famous souvenirs of Urgench.

Places to Visit in Urgench

Visit the famous sites in Urgench and make your Uzbekistan trip more interesting. In Urgench you can visit Statue of Muhammad al-Khwarizmi and Itchan Kala.